REBEL REBELLE- PUNKS & PROVOCATEURS, the photo exhibit, was exhibited at the Foufounes Electriques during April, 2005.

The Website Exhibit is still online!
PUNKS & PROVOCATEURS features a retrospective of over 250 of my underground/ punk/ music photos, taken between '77 - now, in Montreal, Toronto, NYC and Europe! Lots more early Montreal and Fouf photos- check the Blog Index on the site for list of names/bands!

FOUFOUNES ELECTRIQUES
1983-, Montreal...
The Foufounes was, for me, more of a punk clubhouse than a bar back in the 83... I was there the day it opened- the night before, in fact. But Fouf changed with time, expanding far beyond its intimate boundaries and then discouraging the very punks who had founded it. I eventually stopped going. In any case, my son Mishka's now taken over my spot in the thrash pit! I still drop in once in a while to remember, but each time I go there I recognize less of its beginnings. Perhaps that's better. I can appreciate it now for the cavernous twisting medley of sculptures it's become. So what if we would have stared 90 percent or more of its present customers back out on the street, and that includes me in my present manifestation! (Actually, that was malicious FUN, I'll admit.) So what if they play "my music", when they do, to preppy McGill boys in baggy pants and designer baseball caps, and have a sports screen (???!) in the bar- with SPORTS ON??? Well, that's too far. But let's face it. The original Foufouners are mostly long gone- dead, dying or rumoured to have married millionaires and moved to the suburbs. Some like me occasionally show up and hang with Joe Bebel, to reminisce about the old days like the poor, sad wraiths we are... speaking of which, so, where were the old punks for my exhibit opening, PUNKS & PROVOCATEURS?? I really did expect some of them to show up - but then again, the weeklies (ie. Mirror, Hour & Voir) didn't even bother to list the opening of the Foufounes show in their ARTS section, as the venue doesn't make it a "real" exhibit, according to their illustrious opinion... so far has the "alternative" media fallen from grace. I'm disgusted. Eventually I managed to convince the VOIR (MERCI!!!) that the show was valid, and they more than made up for it by giving us 2 articles WITH photos! As far as la presse alternatif anglais- the Mirror and Hour - not even a listing the entire month! They even ignored the photo auction which benefited Medecins Sans Frontieres. It's really too bad as there were probably people who would have shown up if they could have heard about it. We did get a lot of visitors nevertheless and a great response, but my fantasies of an old punk reunion never materialized. Thanks to the curator, the wondrous Joe Bebel, and the Foufounes Electriques for their support! 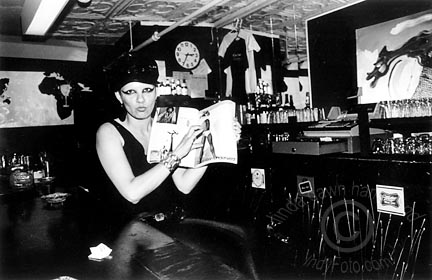 Vava Vol- Fouf's amazing bartender and punk diva throughout the 80s and 90s!
See also Vava's wedding to Matt, a Foufounes bouncer.
The photo is taken in the Fouf's original bar area (Eastern Wall), which was a tiny but intimate space. If you visit today, the section to the East of the dance floor on the second floor was the original Foufounes in the early 80s before expansion, and the stairs just to stage right leading down to the street was the original entrance. Foufounes Electriques translates as "Electric Ass"! 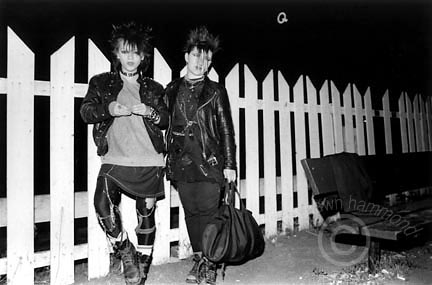 Punk girls (two Lindas taaken by a third) in front of Foufounes on Ste. Catherine's, '83 (the year Foufounes opened) 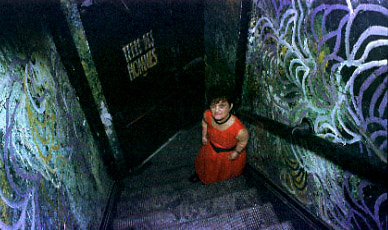